Oceiros, the Consumed King is a boss enemy in Dark Souls 3. He is found in the garden below Lothric castle, guarding a shrine. It can be assumed that he is blind (like Seath), as his eye sockets are empty, and he makes references to this throughout the fight. He is a very vocal boss, and talks of an invisible or imaginary baby which he cradles in his arm for the first half of the fight.

The first phase: Always stay underneath him with your shield up. Only attack him after he attacks. This way you can fight him without getting hit, also works for second phase. The only attack to look out for in this phase is when he stabs his staff into the ground to call up an AoE of white dragons breath on the floor. Easy to dodge but it does a lot of damage and deals curse. Second phase starts around when you hear a baby cry, he staggers for a second, shakes his head then crushes his staff down. After this he will do two attacks on the ground and the second phase finally begins.
with in the second phase, try to get behind him or under him, preferably the bottom half. The boss isn't extremely easy to stay under so it may take some practice. If you're near the bottom half or the back legs, he won't do his rush attack, which can easily kill you in one combo. Try to take a one handed weapon for quick attacks, but if you use two handed make sure to time your attacks carefully. The boss can be bled, so an upgraded Bandit's Knife is decent for this fight but not the only method. Only use it if you're comfortable with the weapon. He is resistant to it, but the effect works regardless. The boss also likes to do some flying attacks with white dragons breath or even just plain white dragons breath attacks. These attacks are easily avoidable provided you're constantly going after the boss. High stamina is key in this fight. You can block some of his attacks but the second phase is a whole other story. Unless you can block all four or at least three of his attacks without losing too much stamina, you might as well just be two handing your weapon. Get in as many attacks as you need while the boss is finished with his first move. He doesn't really have follow up attacks to his normal attacks so he's pretty straightforward in that regard. The biggest problem you need to deal with is the camera/walls. Try to stay within the middle of the arena. If you can't see his attacks, he can 1-hit you easily. If you're up against a wall, you won't be able to dodge very easily. If you find yourself with this problem, just roll under his body as quick as you can.

Just prior to his charge attack, during his second form, what seems to be the cry of a child can be heard and acts as a tell for one of his more dangerous attacks. This boss also suffers badly from uneven terrain. When on the piles of rubble around the stage, many of his attacks will miss the player, although he will still be in range of overhead slash attacks. Although it can be difficult to keep up with his charge attack, his very long tail stretches behind him, and can be attacked directly with a weapon having adequate swing range. It is not confirmed if his tail can be cut off, similar to dragon bosses in Dark Souls 1.

This is a very easy way of beating him but it works well and it makes it so you get to skip his second phase.

You need to find the root system in the back right side of the area and make sure the entire time you are fighting him that it is in close range for you to run into.

As soon as he starts going into his second phase sprint into the corner and bait his charge. As soon as he is in there run around the roots to the other side he will just keep charging into the roots and not be able to get to you. Pull out your bow or spells and lay into him, make sure to watch for his ice attack because they still can hit you.

It's really important to note the fact that he can, and will eventually use his spin attack that position himself behind you, freeing himself from the roots and leaving you trapped between the boss and the roots themselves.

This boss won't be too tricky for pyromancers. During the first phase, you'll have a relatively easy time. Keep your distance and most of his attacks won't reach you. During the phase transition, you'll have the chance to lob some spells. His charge is the attack that'll give you the most trouble. Be prepared to dodge this, since it's quick and deals big damage. As long as you keep your distance, the tail swipe won't trouble you too much.

This is one of the most difficult bosses in the game for spellcasters, as Oceiros has a high magic resistance, and phase 2 in particular poses a challenge for sorcerers. While it is relatively easy to avoid getting hit by him in the first phase of the fight, Oceiros will attack relentlessly in phase 2, and sorcerers will find it difficult to find a window of opportunity to cast. A relatively reliable strategy is to do so after Oceiros has charged you. Make sure to dodge properly, as his damage output is rather high. As soon as you have gotten behind him, he will usually either do a few more attacks in whatever direction he is facing, prepare for a tail swipe, or make a jump away from you. In any case, you should be able to cast a spell during this time window (but make sure that you time it so you can dodge a tail swipe).

Keeping a lot of distance against Oceiros is usually a bad idea, as his most deadly attacks are fast charges which may catch you off guard while casting; he also tends to phase through your projectiles while doing his charges, or simply avoid them with his erratic movements.

It is more beneficial to use spells with a shorter casting time in the second phase of this fight, such as Great Soul Arrow instead of Great Heavy Soul Arrow. Homing Soulmasses are also less useful, as they will often miss Oceiros entirely. It is a viable strategy to give up on projectile spells altogether and instead hack away at Oceiros' back leg with Farron Flashsword - although a decent lightning weapon will probably do comparable damage.
In any case, Oceiros is much less dangerous in close combat, so if you manage to imitate the common melee strategy of hacking away at a boss' back legs, you have good chances of beating Oceiros with magic.

Oceiros was once the King of Lothric and was married to the Queen of Lothric, who was initially revered as the goddess of fertility and bounty, and Ocelotte was the youngest child the queen gave birth to. He went mad trying to harness his royal blood for a greater purpose, leading him to the heretics in the Grand Archives, where he discovered the twisted worship of Seath the paledrake.
He may have gone senile or mad with age and isolation. His dialogue mentions there is a child called Ocelotte; and he cradles something, as if he were holding a child, though nothing is seen; yet as you smack him around, he tells Ocelotte to come out, as if just realizing that Ocelotte isn't in his hands, and now he himself doesn't know where Ocelotte is. Perhaps he remembers something painful, as when you smack him around further, he screams the name of Ocelotte and becomes a frenzied beast, no longer human. As you weaken him, you will hear a baby cry...perhaps the child really is invisible? Or maybe the king, consumed by his desire to study and gain the power of dragons, experimented and fused with the dragon child Ocelotte, becoming a twisted dragon man, and the cries heard when Ocelotte takes over are cries of pain? Or maybe the child is just invisible. Speculation can only go so far. Oceiros is part of a series of reincarnations of  Seath the Scaleless, whose essence is entwined with the  Moonlight Greatsword. This may have profoundly affected  Lothric's controversial conception ( read more).

"Ahh, you ignorant slaves. Finally taken notice have you?
Of the power of my beloved Ocelotte, child of dragons.

Well, I will not give him up.
For he is all that I have."

"Ahh, dear little Ocelotte.
Where have you gone? Are you hiding from me?
Come out, come out, don't be afraid.
You were born a child of dragons, what could you possibly fear?
Now, now, show yourself, Ocelotte.
My dear, little Ocelotte."

Whilst going into 2nd phase

He seems to scream "Ocelotte!" whilst becoming feral like.

In the Japanese subtitle, he says "Kyyaaaaaaaahhhh!". The subsequent scream is not subtitled.

"Ignorant slaves, how quickly you forget." 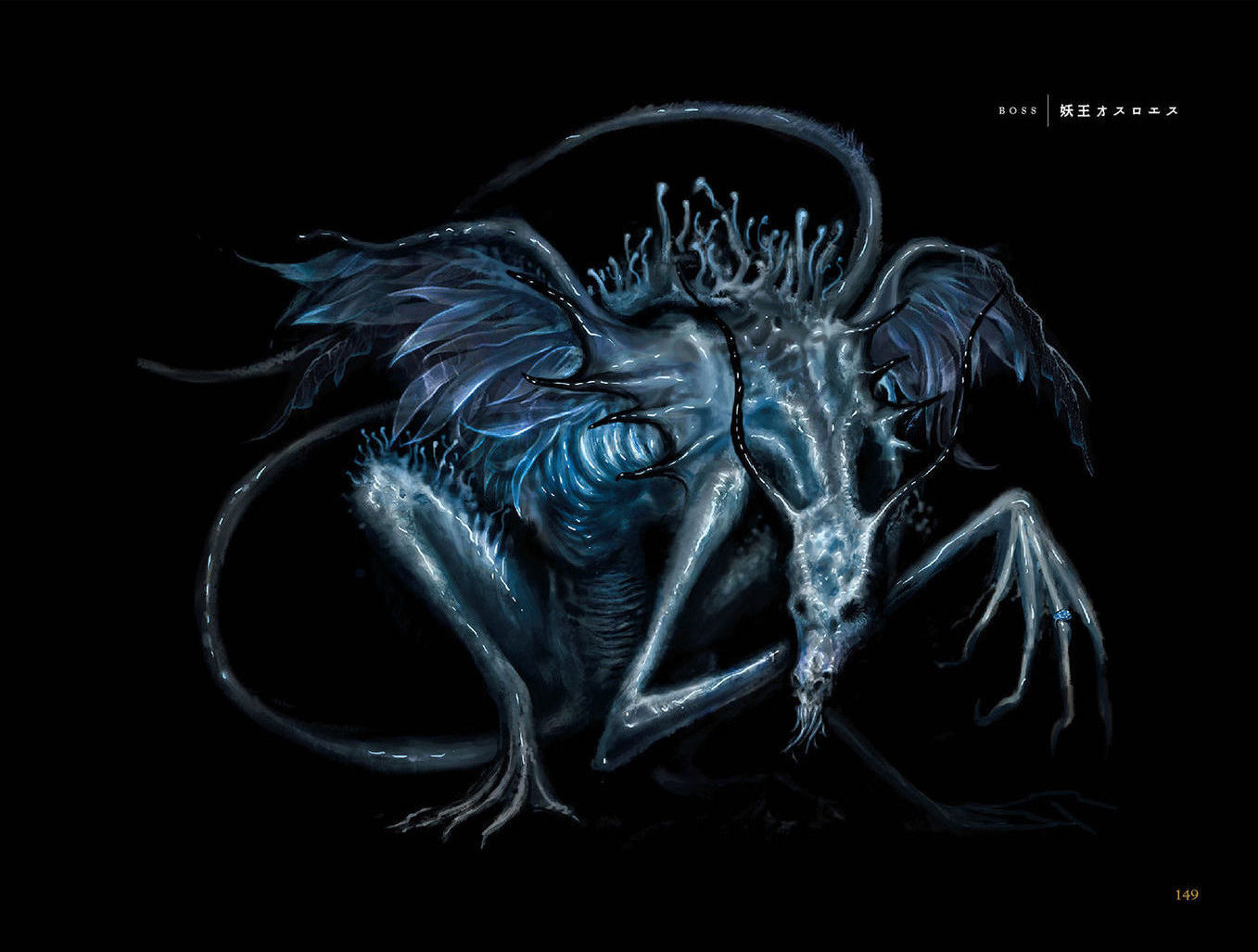 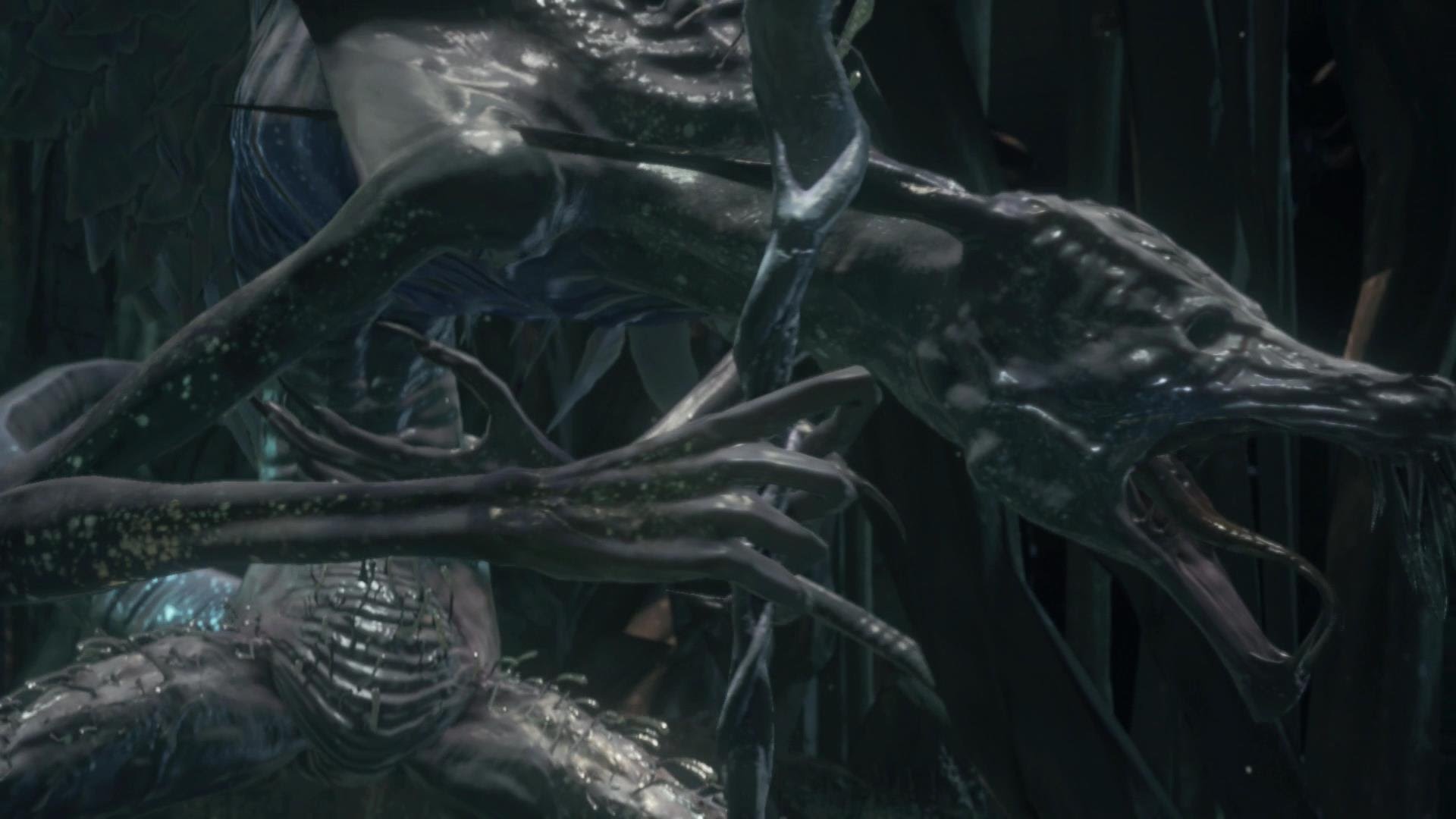 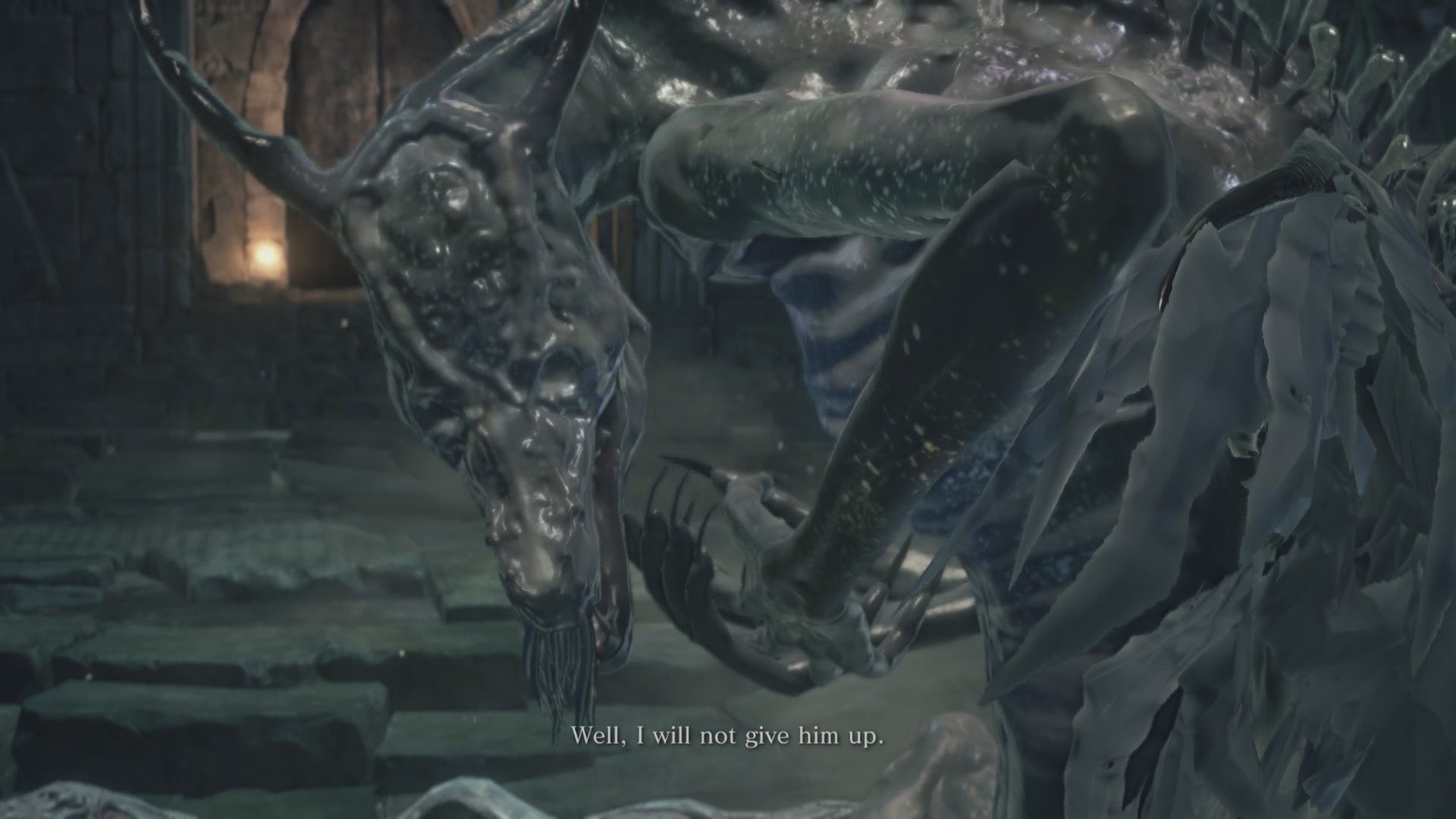