Pontiff Sulyvahn is a boss in Dark Souls 3.

Strategy 1 (Fast Melee without a shield)

Sulyvahn has very long combos and leaves few openings, so be sure to better your stamina with the Cloranthy Ring, Ring of Favor, Grass Crest Shield or Green Blossoms to be on the safe side. When you enter, he will likely leap at you with his fire sword. Roll to the right or the left when his sword is about the reach the ground and attack him one or two times. Then, get as far as you can. He will likely do the same attack over and over.

Be careful, because if you get too close, he will chain his attacks rapidly, and you won't be able to avoid them all. If you want to get close to him, roll through his attacks and strike immediately when he stops attacking. The preferable angle of attack is his back, but he turns quite rapidly.

When his phantom clone appears, don't bother attacking him and make sure to roll through its attack and wait as far as you can, luring Pontiff into leaping towards you. Be careful, because he could also use a ranged magic attack, which is quite deadly, but is easy to avoid; just roll to your left or right.

You can read a long guide with video on "How to Parry Pontiff Sulyvahn" here. This strategy aims to burst down the boss before he has a chance to get in your face with two copies of himself. Thankfully, this boss is extremely prone to parrying and thus equipping a small shield such as the Target Shield is advisable for facing this boss. Using the Hornet Ring, if the player has it, is very helpful as well.

The best attacks to parry are the overhead attacks with delay (both the attack with the fire sword and the one where he uses both weapons can be parred) as well as the combination attacks he has. For these attacks, blocking the first attack often sets up for the second parry quite well, although there is a slight delay in his second attack that you should watch out for. If a parry is missed the best idea is to immediately roll away. He is very unlikely to hit you like this. Iron Flesh can also be utilized here, enabling you to poise through a botched parry to easily get the follow-up.  One cast should give you enough time to get him to phase two.

You can dodge the first move he does (jumping slash) left and behind him, stay there and hope it baits him to continue with a single swipe that is easy to parry. Just hit the parry button as soon as you see the swipe. This bait tactic does not work 100% of the time but more often than not.

Two parries should be enough to get him into the stage where he begins to transform, first with a black aura around him and then with the animation where he points his sword upward and it spawns his clone. During these two animations you should two hand your weapon and try to do as much damage as possible.

If you have weapon buffs they can be very useful here; simply buff your weapon while he is standing up from the second parry and then attack as fast as possible. Even if you cannot burst the boss within these two animations, his remaining health should only require a couple more hits. Be patient and soon the boss will be down before you know it.

The only really parryable move when the clone is out is the jumping slash. Clone goes up, Sullyvahn goes up, clone comes slashing down, Sully does the same. Dodge the clone and immediately parry. No waiting at all. Just dodge+parry+riposte. Just be sure the move is not jumping smash instead. If the clone drops straight down and thrust his sword to the ground do not try to parry Sully. Just dodge.

Staying at extremely close range and lock-on circle strafing the Pontiff is very effective in the first phase of the fight but requires a little bit of stamina management unless using a greatshield (see below.) Many of the Pontiff's attacks will pass overhead or miss completely with this strategy and a stable shield with good fire and magic block, such as the Wargod Wooden Shield or even better, the Dragon Crest Shield, will reduce the damage taken significantly.

Possibly the safest way to combat this difficult boss is by hiding behind a Greatshield, particularly the Greatshield of Glory, which is able to absorb a massive amount of damage without being staggered. Yhorm's Greatshield is also viable, and it is obtainable, just like the Greatshield of Glory, in New Game by fighting Yhorm before Aldrich or the Pontiff. The strategy? Simply stand near him with your shield raised and block until you see a clear, sure opening and strike him with a fast weapon (like a Longsword or Axe) 1-2 times. The Butcher's Knife is particularly effective for this purpose, because the health you regenerate from hitting him is almost the same as the chip damage you will take while blocking, which allows you to block for much longer. The Chloranthy Ring and Green Blossoms are highly recommended, as well as the Estus Ring to maximize heals, and the Knight's Sword Ring to maximize damage right after a heal. Havel's Ring is all but required to maintain a fast roll while holding such a massive shield. With this strategy, his first phase is relatively simple.

If you need to heal only do so after his crushing fire sword or magic stinger, when he has the most recovery.  You can also try to gain distance on him, but be aware that he can cover a massive distance to punish you, so be prepared to put a football field between the two of you.

His second phase is a bit trickier. When he begins his "transformation", back up to avoid the explosion, and then move in for 1-2 hits. It is also a perfect opportunity to heal. He will almost always attempt to summon his clone immediately after this, so be prepared to deal with that. Get close and wait until the clone appears, and then attack it as much as you can. Be careful though, if you use too much stamina he may punish you severely. Again, the Greatshield can absorb a stunning amount of punishment, and should be used whenever in doubt. The only attacks that will severely damage you through the shield are his flaming plunge attacks and his magic attacks. Be wary of those, and prepared to dodge to avoid big damage. Ideally, you will be able to kill the doppelgänger and simplify this phase. If not, you still should not have too much trouble taking him down if you simply play safe.

For a full playbook, here is how the fight goes. Summoning, embers, and such are not necessary for this playbook, and it contains five valuable bits of knowledge which can net the player lots of extra damage that can kill Pontiff.

With a large amount of points invested in Faith and Intelligence (28/32 respectively in my case) and a properly upgraded Pyromancy Flame (+5), the boss battle becomes extremely trivial. For this fight, use the Great Chaos Fire Orb (from the Izalith Pyromancy Tome) spell. Upon starting the fight, kite backwards. The Pontiff's jumping gap closing attacks are fairly easy to dodge in comparison to his other moves and give you ample time to land a spell or two. Once you've chipped him down to his second stage, he'll spend a significant amount of time for his transformation. This gives you free time to lob more Fire Orbs at him. You should only have to dodge a jumping attack or two until he attempts to summon his clone. Keep throwing Fire Orbs at him, the puddle of fire left behind after each hit will end up killing his clone almost immediately. At this point he'll either be dead or a few spell casts away from death. If he attempts to summon his clone simply lob another Fire Orb at it, killing the clone and dealing him a large amount of damage. Continue kiting backwards as long as it takes for you to kill him.

The fight is very easy with the large investment in Faith and Intelligence. It simply requires slightly more patience with lower values. With my values it's possible to kill the Pontiff in about 30 seconds with very little actual maneuvering etc.

For this fight you should first get the Logan's Scroll and free Karla in Profaned Capital. This will give you the Soul Spear, Affinity and if your INT is above 50 the Court Sorcerer's Staff. Damage is your best defense in this fight, with enough damage you can one-shoot the illusion he spawns, thus making this fight quite trivial. On NG+ you should use the Crystal Soul Spear and the Court Sorcerer's Staff. Steady Chant can be tricky with this boss because he will often get you in the midst of charging it, which is why I chose the Court staff over the Sage's Crystal Staff.

When you enter the room, cast Affinity and be ready to roll right when he jumps. In general you can evade most of his attacks by rolling backwards or right. When he swings from (your) right to left you can roll under the swing if you go right, he will most likely hit you if you go left. Affinity does almost half the damage of a Crystal Soul Spear so you should definitely use it. The next opportunity to cast it is when he summons his illusion. Cast Affinity and a Soul Spear, this will one shoot the Illusion. If the (Crystal) Soul Spear does not one-shoot it for some reasons, stay back and let Affinity finish the job. If you are far away from him he will often just walk towards you, use this opportunity to cast Affinity and some Soul Spears. See video above as an example for this strategy on NG+. 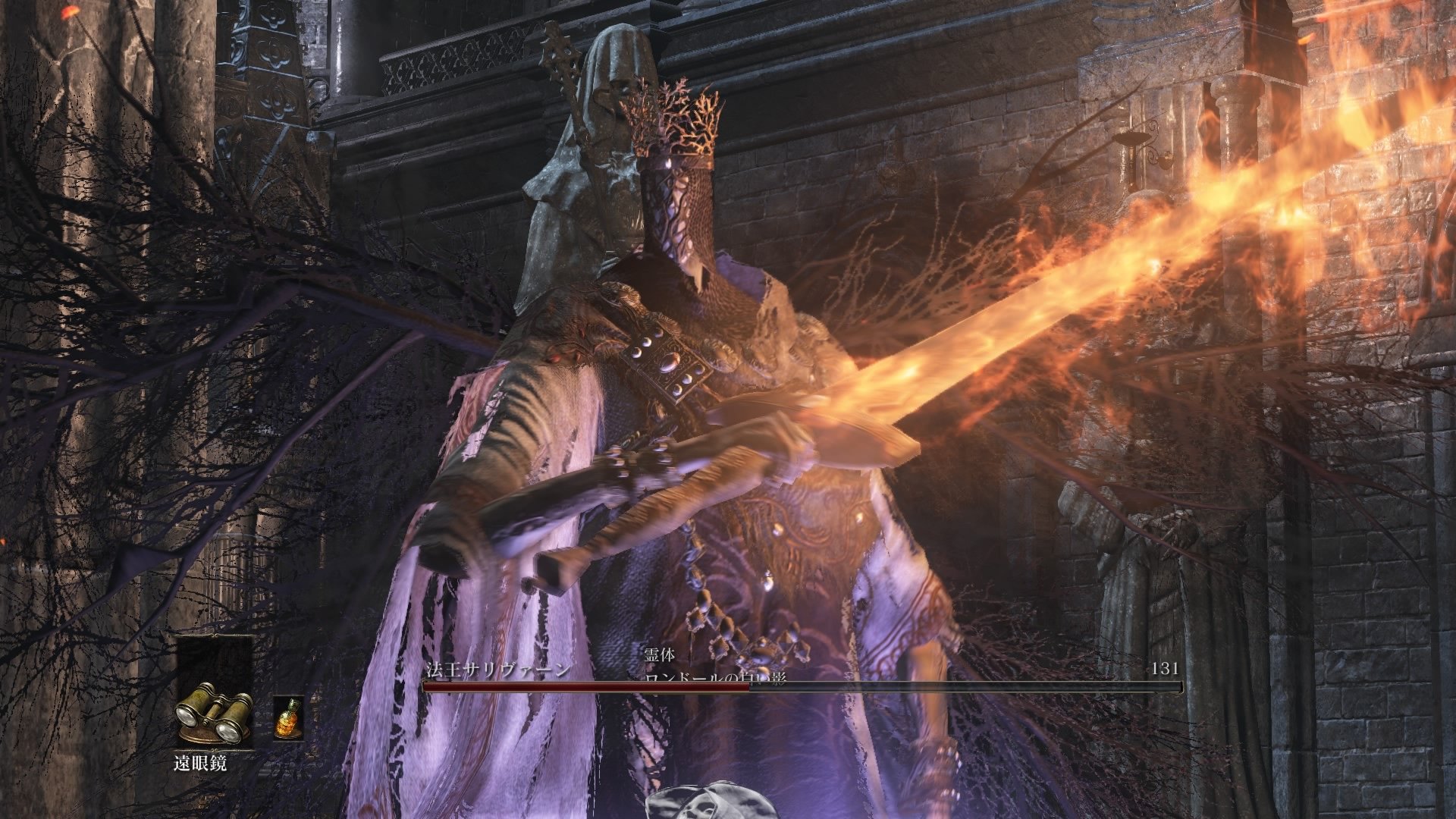 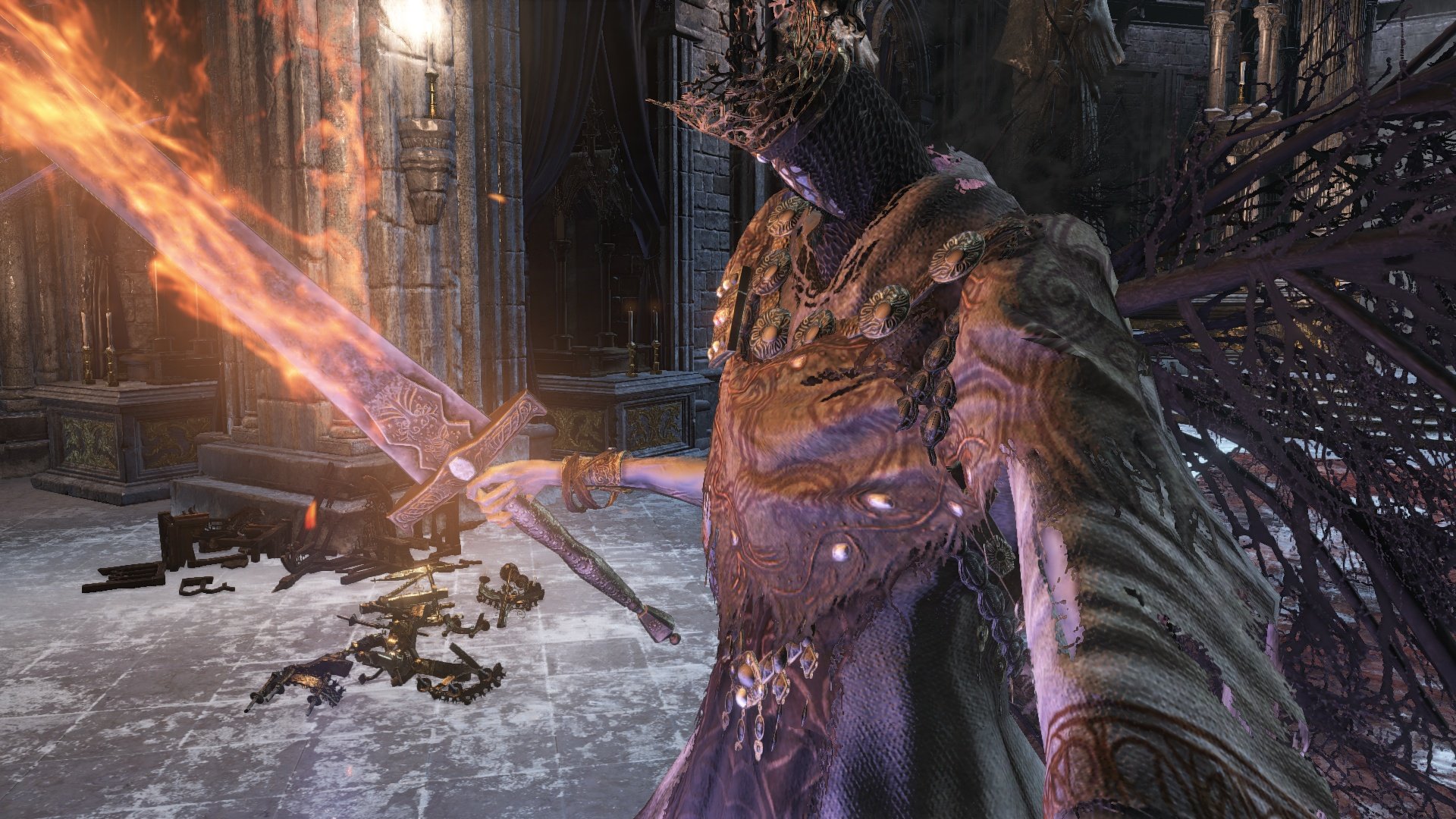 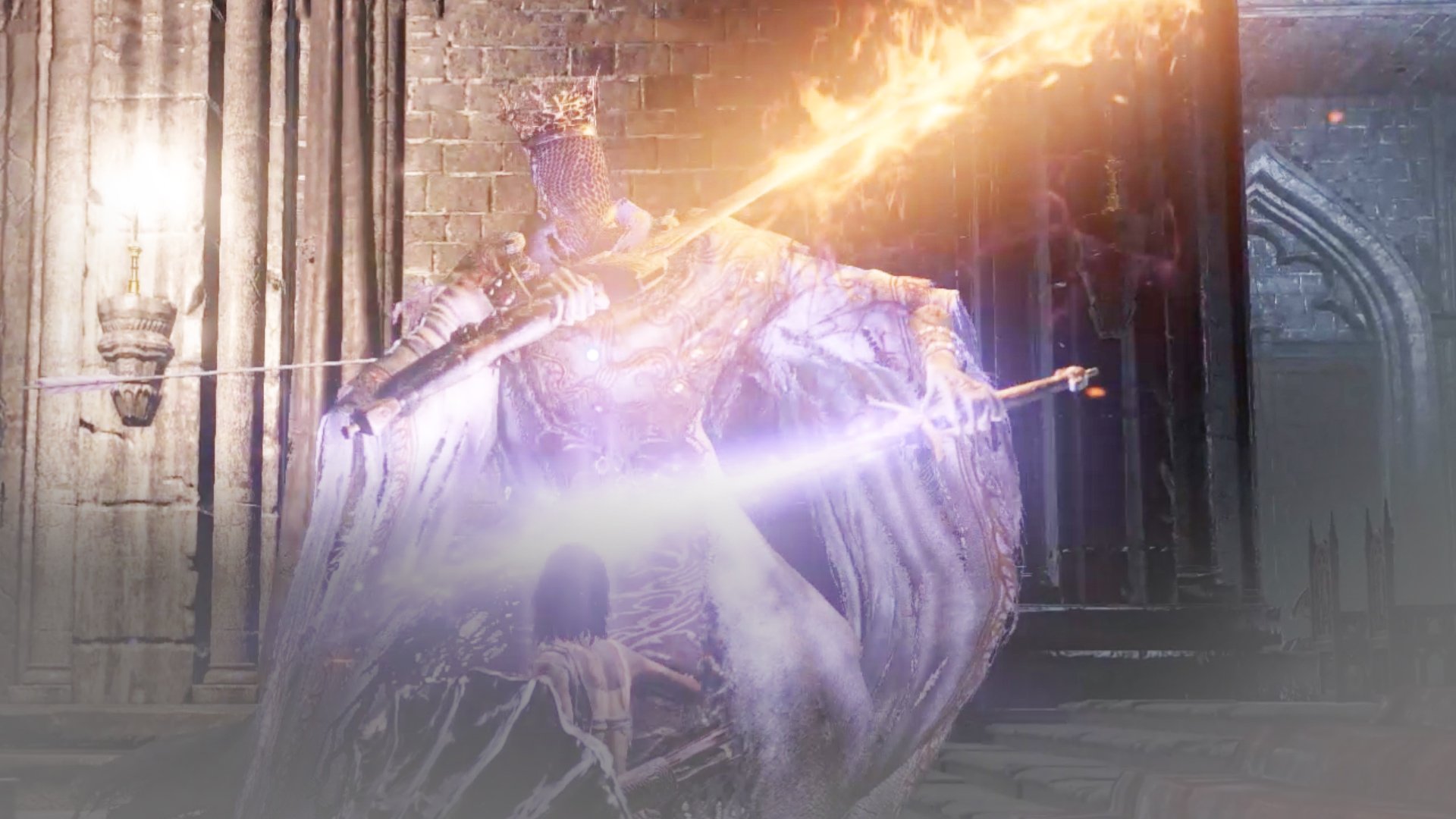 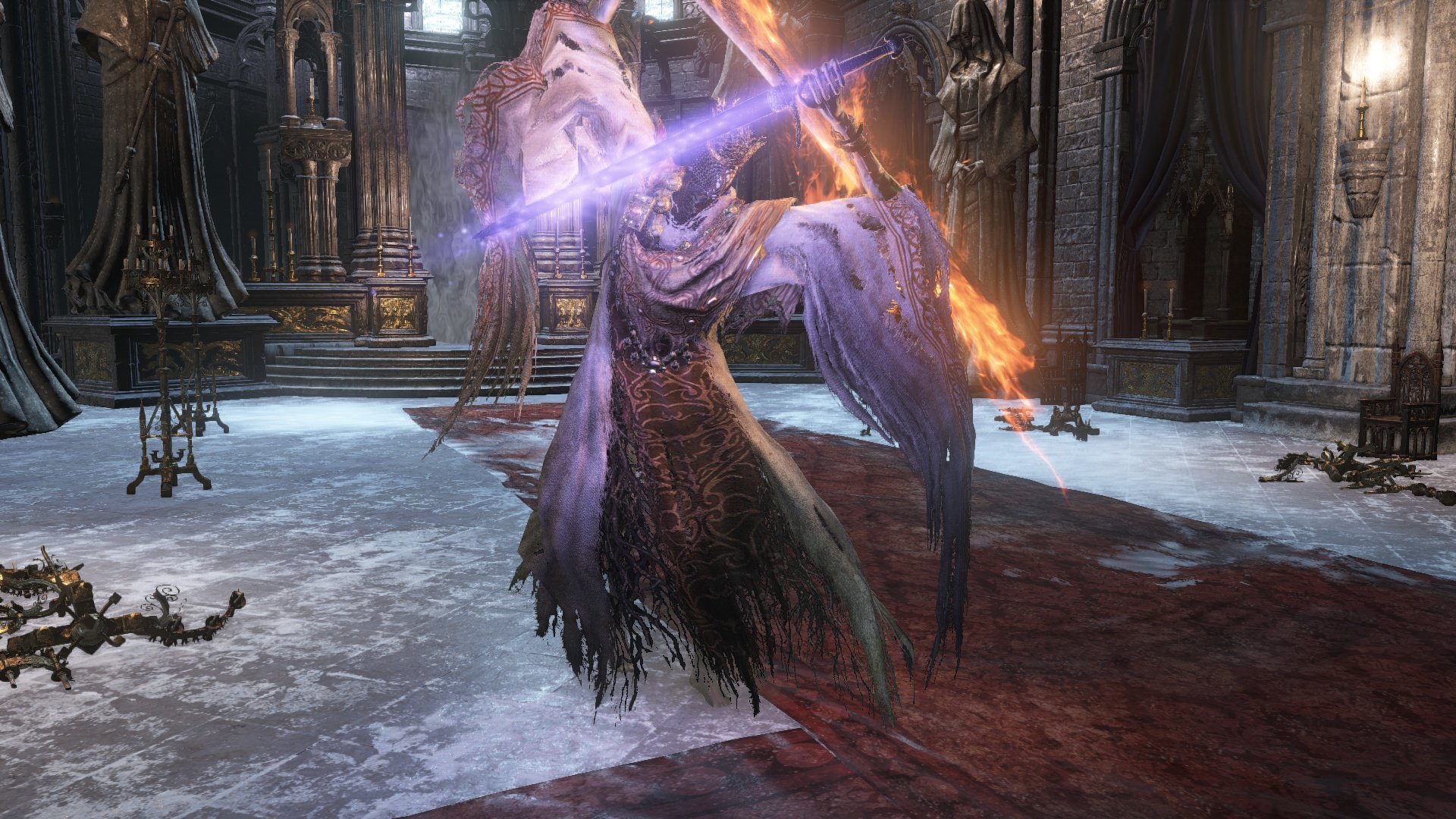 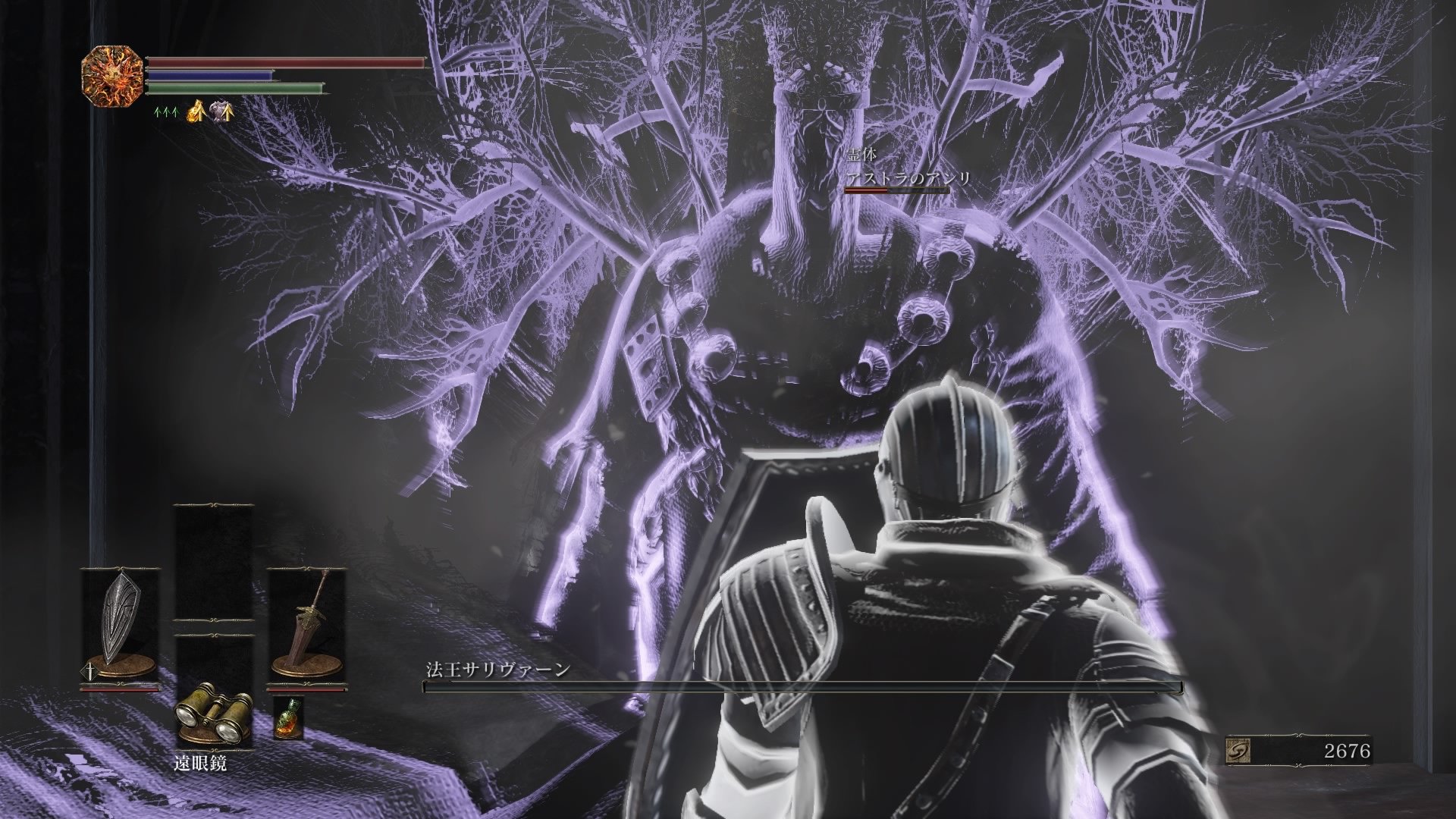 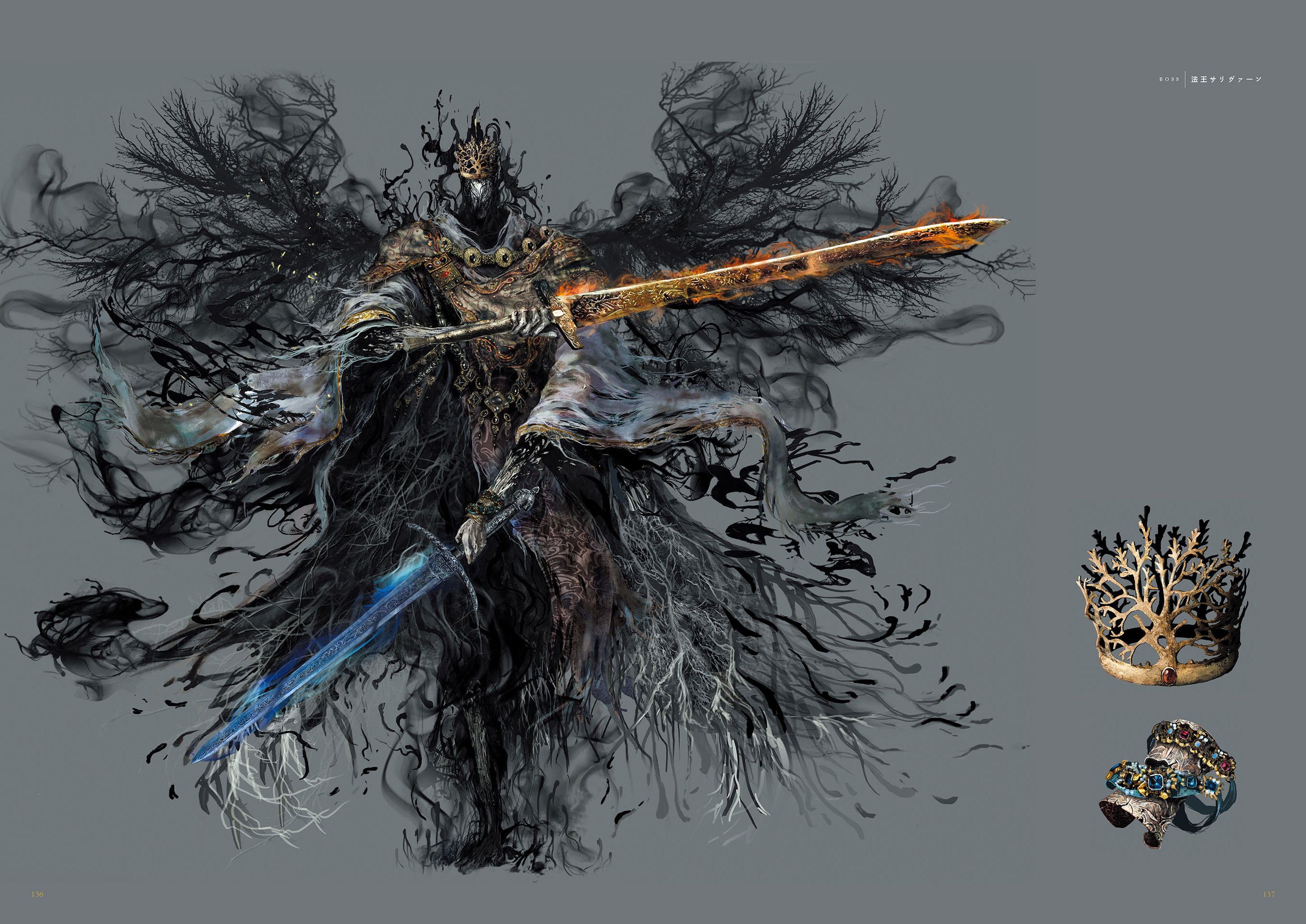