Deacons of the Deep Information

Deacons of the Deep is a Boss enemy in Dark Souls 3. The congregation of clerics defends a roaming soul, that is eventually revealed to be the Archdeacon.

This is a relatively straightforward fight. You're going to sprint from enemy to enemy killing the ones with the red aura as fast as you can, following it from one enemy to the next. The undead do very low damage so prioritize offense and heal if you take too much damage.

In phase 2 there will be one enemy that possesses the red aura for the duration of the fight. He will be closely guarded by other undead who will try to put a protective barrier between you and them. Try and maneuver around them if you can, or if you feel confident try and AoE them down with a wide swinging weapon. Rolling into enemies is a good way to get out of trouble, as it will make them stumble backwards which should give you some breathing room.

Casters will pool their magic together with the main hollow to fire a black mass that goes through objects to hit you but won't track. Keep these four casters alive until they start pooling their magic separately making a curse debuff fog. Kill one and their spell will be halted. Ignore them and the player will be instantly killed by a curse.

Pontiff's Left Eye will allow you to dive into the mob safely when you use a weapon with large horizontal attacks as it will heal you for each enemy you hit in one swing. Using an item or consumable that increases stamina regeneration will allow you to remain within the mob longer, assuming a brief pause after each swing. As long as you are swinging with an appropriately sized weapon (such as the Hollowslayer), it is possible to heal at a rate faster than damage can be done to you, effectively rendering you immune to any attack that does not stagger. It is a good idea to avoid allowing enemies to circle in behind you, as it increases the likelihood that an enemy will be able to use a physical staggering attack on you before being knocked off balance by your weapon.

Only a few magic spells are effective in this boss fight, namely (Crystal) Soul Spear, White Dragon Breath, Soul Stream and Soul Greatsword, which can all help you taking down deacons left and right. It may however be difficult to cast properly due to the high number of enemies and their ability to cast fireballs, which may interrupt your own spellcasting.
Note that despite the Soul Spear's ability to pierce through enemy groups, it can be very difficult to hit the actual boss with it due to not being able to target him properly; the same goes for White Dragon Breath and Soul Stream.
The seldom-used Pestilent Mist can actually be an absolute killer in this boss fight, in particular when used in combination with Aural Decoy or an Alluring Skull. Notice that it takes relatively long to set up such a trap, so it is advised to do so from behind a corner or pillar; also, try to cast The Pestilent Mist first, as its effect expires a little slower than the lure.

For the most part, the best strategy in this fight will be to slay a few deacons with a Soul Greatsword, then pull back behind the pillars on the sides of the battlefield, and start another attack on another deacon cluster.
In Phase 2 the Archdeacon and his henchmen appear, and once again the Soul Greatsword is your best tool to clear the way; however, the best way to attack the Archdeacon himself is with Farron Flashsword (or a regular weapon).
Generally speaking, standing around and casting is a bad idea in this battle, as you will get interrupted or overwhelmed quickly. Try instead to stay in motion, and use corners and columns to your advantage. Notice that Soul Greatsword will not bounce off obstacles and can therefore also be used to attack from behind a pillar.

With Pyromancy this fight becomes a walk in the park and you don't even have to be a dedicated Pyromancer, I used this strategy with my Sorcerer and only swapped the equipment and spells to Pyro without respecing my attributes. Use Great Chaos Fire Orb for damage and Flash Sweat to buff yourself. This does several things for you: GCFO does a lot of AoE damage which means you don't have to always target the red glowing guy, it's enough to get one that is near him. It kills a lot of other Deacons too which breaks up the cluster so you can easily focus on the main target. Flash Sweat lets you pretty much ignore their fireballs even at VIG20 on NG+.

If you need to run to the other side of the cluster, run behind the pillars to lessen the damage you receive even further. When the boss is down to 50%, run up to the Blue Deacons and kill them as quickly as possible or they will heal the boss. Use the corners of the building in the middle to heal yourself and pull the Cluster around the corner and away from the main boss, leaving him open on the other side. See video above as an example of this strategy, although it was made on NG+ you can apply the same tactics to NG.

The deacons use pyromancy in addition to the miracles typical of clerics.

Pyromancy is considered heretical in Dark Souls so this shift to pyromancy is probably connected to their fall from grace.

The red aura that hops from deacon to deacon has appeared before in Bloodborne.

This red aura is connected to blood-drunkness, buffs granted by witches, "rot" and Vermin.

Mad Ghru can also obtain a red aura after grabbing you.

The deacons were followers of Aldrich, Devourer of Gods that stayed behind to protect his tomb.

The name of the Archdeacon in this fight is Royce, as indicated by the description of the set found on his corpse after reloading the boss arena. 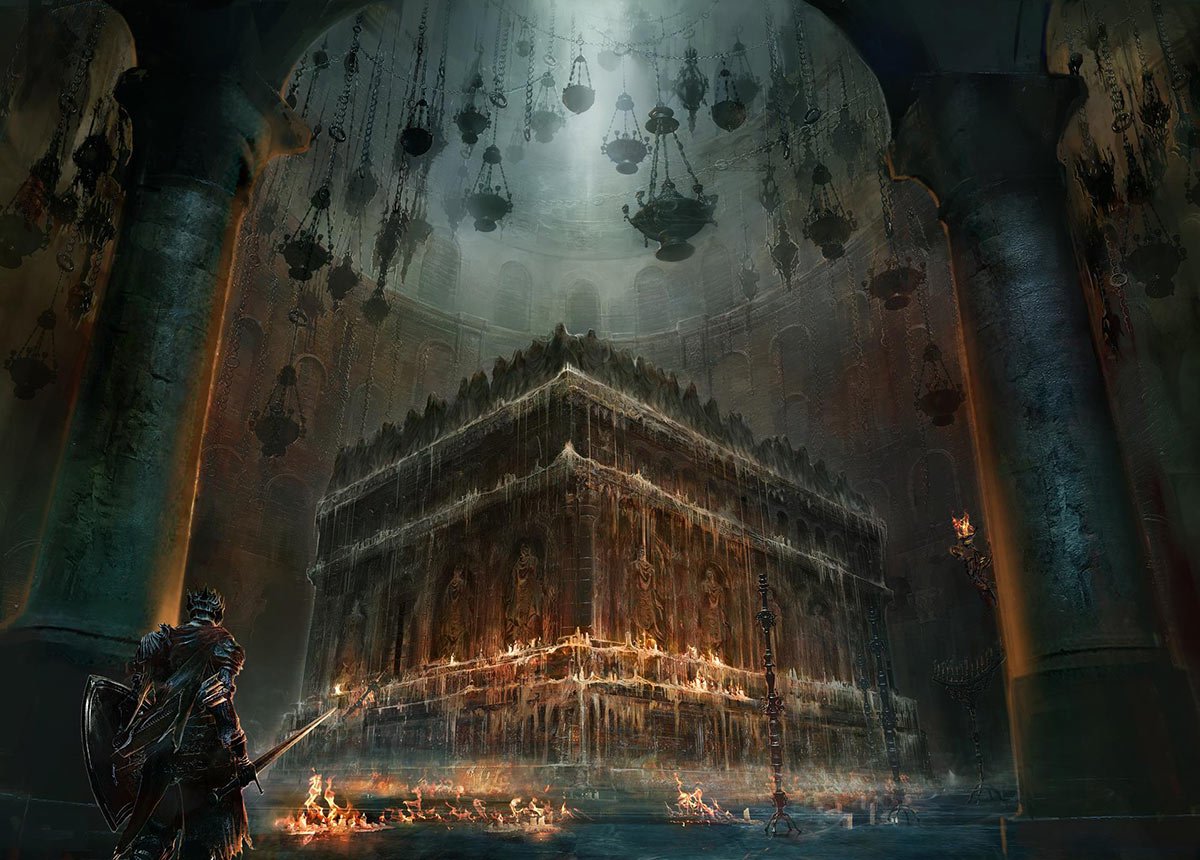